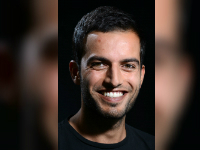 <link people jaron-harambam>Jaron Harambam, Sociology PhD student at Erasmus University Rotterdam was awarded the Young Talent Award by the Prince Bernhard Cultuurfonds. He receives the 7.500 euro grant to perform field research on conspiracy theories in the United States. The Young Talent Award is awarded annually to talented graduates (BA and MA) and PhD students who wish to pursue education or research abroad.

Harambam will be in the United States to meet with several scientists whom write about conspiracy theories. Some of them are closely connected to the political arena of Washington, others are spread across the country.

The scientific knowledge about conspiracy theories is an important part of Harambam’s PhD research on the role of conspiracy theories in our society. With his fieldwork in the United States and by adding the ideas, life stories and interests of these scientists to his analyses, he seeks to add more depth and complexity to this part of his research.

During his stay in the U.S. Harambam will be part of the research group 'Science in Human Culture' at Northwestern University (Chicago). His stay is made possible by an <link news detail>earlier awarded Fulbright Scholarship grant.