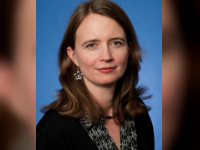 Dr. Kimberly Morgan is Associate Professor of Political Science and International Affairs at the Elliott School of International Affairs, George Washington University. Her research focuses on the politics of social policy in the United States and Western Europe, with particular interests in family policies, health care, and taxation.

Dr. Morgan's book, Working Mothers and the Welfare State: Religion and the Politics of Work-Family Policy in Western Europe and the United States was published in 2006 by Stanford University Press, and her articles have appeared in journals such as American Journal of Sociology, Comparative Politics, Comparative Political Studies, Politics & History, Social Politics, and World Politics.

With Andrea Louise Campbell (Massachusetts Institute of Technology), Dr. Morgan received an Investigators' Award from the Robert Wood Johnson Foundation to study Medicare reform, and they have completed a book, The Delegated Welfare State: Medicare, Markets, and the Governance of American Social Policy (2011, Oxford University Press). In 2006, she was elected to the National Academy of Social Insurance, and she serves as an associate editor of the journal Social Politics.

Professor Morgan received her Ph.D. in political science from Princeton University and, before joining GWU, was a post-doctoral fellow at NYU's Institute of French Studies (2000-01) and a participant in the Robert Wood Johnson Foundation's Scholars in Health Policy Research program at Yale University (2001-03). In 2008-09, Dr. Morgan was a fellow at the Woodrow Wilson International Center for Scholars.