New book by dr. Henri Krop on Spinoza lauded as "the definitive study of the reception of Spinoza in the Netherlands" 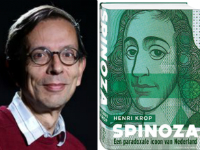 EUR philosopher Dr. Henri Krop’s monograph Spinoza. Een paradoxale icoon van Nederland (Prometheus, 2014) (transl. Spinoza. A paradoxical icon of the Netherlands) was recently published and well received in the press. In a review in the national broadsheet De Volkskrant, the book was awarded four out of five stars and lauded as "the definitive study of the reception of Spinoza in the Netherlands."

Within the Department of History of Philosophy at Erasmus University Rotterdam several members are researching the works and influence of the Dutch Philosopher Spinoza.

Spinoza. A paradoxical icon of Netherlands

In 1677 Amsterdam ‘freethinkers’ clandestinely published the controversial masterpiece of Spinoza, Ethics, which in time would be heralded as a classic work in Western Philosophy. Initially the philosophical treatise was labeled forbidden and Spinoza was considered a dangerous philosopher. The public outcry was so great that even half a century later a minister wrote: "Spit on this grave, for here lies Spinoza. If only his doctrine was buried here too!"

Only in the nineteenth century, he was honoured as the "prophet of an emancipated humanity”. The breakthrough of liberal ideas around 1850 made the philosopher an icon of our country. In Spinoza. Een paradoxale icoon van Nederland dr. Krop, with a wealth of data, analyzes how and why Spinoza could fascinate the Dutch for over three centuries, and he discusses the lasting significance of the philosopher in the twenty-first century.

Henri Krop (1954 ) is Associate Professor of History of Philosophy at Erasmus University Rotterdam. In 2002 he published an extensive annotated translation of Spinoza's Ethics. <link people h-a-krop>Read more about Dr. Krop on his personal profile page.