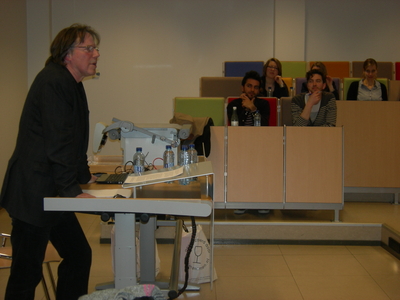 A firm and resounding ‘No’ was the answer to the question of our ‘Is Academic Culture Under Siege’ seminar on Wednesday the 27th of March by Professor Aafke Komter (University of Utrecht). She pointed to the increased number of PhD graduates, improved teaching methods and the dramatically increased presence of women at the university. With this conclusion she positioned herself almost complete juxtaposed to the contributions of Professor Chris Lorenz (VU Amsterdam) and  Dr. Gijs van Oenen (EUR). They focused on the effects of the increasing influence of the neo-liberal logic on academic life. They both pointed out how thinking about the academic world as a market has led to a misguided emphasis on efficiency, and consequently a focus on quantity instead of quality.

The three papers provided plenty of food for debate among the group of twenty PhD’s from five different faculties. Personal experiences, career prospects and a commitment to a stimulating academic culture fueled the debate. During de drinks the arguments continued over academic guerilla tactics in dealing with a managerial logic, the difference between the university in Italy, Turkey and the Netherlands and when the new seminar is going to take place. We as members of the ‘Academic Culture Group’ can only look back, with some pride, on a very energetic seminar. Thanks for coming and we hope to see you soon during the monthly drinks, book club or next seminar.